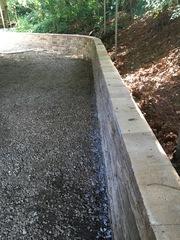 The garage would flood every time it rained. The storm water came down the hill on the side of our home and shoot into the garage. My brother as well as a good family friend who is also a contractor in town both recommended we call John at Indoor Environmental Management. He specifically said, “you have to go with John Hassler and Indoor Environmental if you want the job done correctly.” I worked with both Todd and John and they were super helpful during the project. For the crew – I cannot say enough good. I never did cross paths with them, but my son did. The mammoth changes from day to day were amazing. I felt nothing but confidence in them. They left the yard and work space fastidiously clean. I am a master gardener and they took better care of my plants and replanted them better than I would have. This meant so much to me, and I could not be happier.   Once the job was done, I could tell an immediate difference in the smell and the way the floor felt. The house did not have a musty odor anymore and the floors were much sturdier. I do a lot of yoga in the back room where the wood rot was and now the floor does not shake as it used to. Overall, I enjoyed working with Todd, John, and the IEM crew. I would highly recommend them to anyone that was in need of their service.
Martha C. of Tallahassee, FL
Friday, June 24th
Total testimonials : 23